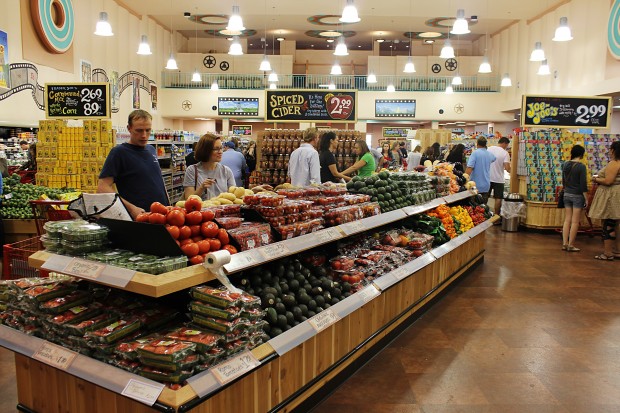 Houstonians used to have to drive all the way to the Woodlands to experience the singular quirkiness of the specialty grocery chain that is Trader Joe’s, but that has all changed since the latest store opening in the historic Alabama Theater.

Though controversy surrounded the decision to convert the old building, many were out in full force even two days later to frequent Trader Joe’s. Their staff was on hand to corral the serpentine line that wrapped around the store.

The popularity could be attributed to the store’s inclusion of low-cost, one-of-a-kind, organic luxury items like Greek tahini, Japanese mochi ice cream and fresh, raw pizza dough that a shopper would be hard-pressed to even find at another store like Whole Foods.

The real draw for many shoppers is that these items are comparatively cheap when priced against similar products stocked at supermarkets.

Trader Joe’s exclusive Charles Shaw wine, colloquially known as “Two Buck Chuck” because of its $2 sale price in California, sells at the West Alabama location for $3 per bottle. While the store is not the first choice of sommeliers, it certainly outclasses gas station wine at double the price.

Packed with shoppers, the tiny store’s atmosphere could best be described as intimate. A typical supermarket may stock upwards of 50,000 items, but Trader Joe’s carries only 4,000, most of which are Trader Joe’s own brand of specialty ethnic foods.

For some, the experience was a new one. Shoppers could be seen poring over novelty items and waving friends and family over to gawk and marvel. Others were happy to be reunited with Trader Joe’s in a more convenient location.

If Trader Joe’s left a positive impression on even a fraction of the hundreds of shoppers that passed through its doors since Friday morning’s grand opening, then larger Kroger and H-E-B grocery store chains have some fierce competition in town.